Between Friday 23rd May and Tuesday 27th May 2014, I was part of a 180 mile + cycle challenge from Netherlands to Belgium for Luca and St David’s Hospice.

The St David’s Hospice provide and continue to develop a free and comprehensive palliative care service of excellence throughout the unitary of authorities of Newport, Caerphilly, Torfaen and Monmouthshire for people, their families and carers facing a progressive life-threatening illness which is no longer curable. Visit http://stdavidshospicecare.org for more details.

For Luca has been set up to provide Luca with the best prosthetic legs available for his future. This courageous 4 year old boy was struck down with Meningococcal Septicaemia in early January 2011 and his life changed forever. This horrendous disease ravaged every part of his body and in hours left him fighting for his life. Luca lost both his legs, which is why we are raising funds to cover the lifetime costs of specialist prosthetics not available on NHS. Visit https://en-gb.facebook.com/ForLuca1 for more details.

I had not heard of either of the causes prior to discovering the event poster, which was during an evening out with my colleagues in the urban tap house. I emailed myself a photo, and had my place confirmed by the end of the following week.

I’ve been a casual cyclist since I learned how to ride a bike, but I started to increase the mileage after my place had been confirmed. My training record started in March, and can be seen below.

The yellow markers are comments about certain days. The larger block of red marks when the challenge took place, I kept recording the mileage post challenge until I broke the 2000 mile mark. Unsurprisingly, Monday was not a good day for high mileage.

As part of the training, I was not drinking alcohol - with a few exceptions, such as my friend’s stag party. I also took part in the Big Bike ride for St Davids Hopsice - an 80 mile cycle from Newport to Monmouth, and back - with a few places in between.

My diet didn’t change much, apart from the fact that I needed to eat three times the amount of food that I usually would. I don’t consider this a bad thing.

I didn’t have a road bike when I started, but I was able to get one through the cycle to work scheme. Both bikes used for training are below, you can probably guess which one I prefer to ride ;) We were instructed to drop our bikes off at CF3 bar and kitchen on Wednesday 21st May, as I have no other means of transport - this was a challenge in itself. Thankfully one of my friends agreed to pick me up after work. It felt strange to leave my bike, but I knew it would be safe in the van. I was carrying a mini pump, bike tools, my phone, spare inner tubes, cO2 canisters, a puncture repair kit, water, food and clothes. This is generally what I carry on every cycle. The organisers also had support vans on the route in case of any emergencies or problems.

Travelling to the challenge

On Friday the 23rd, we had a coach from Cardiff to Bristol airport scheduled to leave at 13:00 - prompt. I had left my packing until the morning, but made it on time. On arrival to the airport, we checked in and went through passport control. At this point, there was an announcement for me to go back to the check in desks. Apparently they are a bit sensitive to cO2 canisters in your suitcase, before you ask - they’re for quickly inflating tyres post puncture repair. Once the confusion was cleared up, I was allowed back through the passport control. The flight took roughly the same time as the coach trip, and it wasn’t far from Schipol to The Hague. We had the first night to ourselves, so a few of us decided to grab some food and take a stroll along the beach. Day one - feeling nervous and excited

The first day took us from The Hague to Burgh Haamstede, passing through Scheveningen, Massluis Rozenburg, and Goederede. We followed the coast between Scheveningen down to Hoek van Holland, at which point we followed the canal to Maassluis - where we had a short ferry trip. From here we headed to Brielle, over a stunning dam and into Goedereede.

The cycling started around 9am - we had a few issues with getting slightly lost, and people not staying close together. These were resolved by lunch time, when the realisation of how important it is to stay together in a foreign country had kicked in. With strong winds towards the end of the day, and some people having cycled more mileage when finding their bearings - we had a well-deserved buffet in the hotel and some much needed rest after roughly ten hours on the road. On a side note, my Mother and Brother had travelled to Burgh Haamstede to support me, this was a lovely surprise and somewhat overwhelming. This put me in a great mood for day two.

By day two - keeping to the right had become natural, dedicated cycle lanes were adored, and trams were no longer a novelty. With the temperature around 20 degrees Celsius in the morning - we knew it would be a tough day. Cycling from Burg-Haamstede to Ghent, we went through some stunning woods before reaching the long dam, Neeltje Jans. We had a main foodstop in Veere, and went along the canal to Vlissingen. From here, we took the ferry to Breskens and headed east towards Izendijke, Flanders, Bassevelde and into Lembeke. With more woodland (Kwadfe Bossen) and some tricky sands we headed towards Gent, following the canal from Ostend. We finished the day in the Walrus cafe. This was also the longest day of the trip, but the beautiful stretches, dams, canals, and scenery made it all worthwhile. My family said their goodbyes at our ferry stop in Breskens, seeing them again helped me to maintain high spirits throughout the day. No ferries on day three, we cycled from Ghent to Langemark, through Machelen and Passchendaele. We started off the day by following the river Leie, going through Afsnee, St. Martens-Latem and stopped off at the castle of Ooidonk. From here we cycled to Deinze, back along the Leie canal and stopped in Machelen-aan-de-Leie for some food.

Heading towards Izegem, we followed the Roselare-Leie canal onto Izegem and west towards Passendale.

We stopped off at the Memorial museum (Tyne Cot cemetery) and Menin Gate. Both of which were very emotional places. They provided some perspective on what we were doing, and the sacrifices made that allow us to do so. We then went via Zonnebeke, into Ypres and finished up in Langemark for the celebrations. Initial celebrations and the award ceremony took place. We had a fantastic buffet accompanied with one or two drinks, and a late night (or should I say early morning) in a local Belgium bar. Post celebrations on Monday night, I was suffering Tuesday morning. With a long way before getting home, we headed off on the coach to Dover. Followed by a quick ferry ride across the channel, and then back on the coach to Cardiff. We arrived around 18:30, said our goodbyes and headed our separate ways. I was feeling better by this point and cycled home with my suitcase in one hand, and the bike in the other. Probably not the smartest thing I’ve done, but it worked surprisingly well.

No time to sleep yet as I had celebratory diner plans with my housemates, eventually getting to bed after 23:00. The next day, I woke up just before 12 - well rested and moving reasonably easily. Two days after completing the challenge, I was back on the bike and recovery was progressing well.

The overall experience was beyond all expectations. There is a saying in Welsh, ‘wrth fy modd’, which roughly translates to ‘in my element’. I find this quite fitting to sum up how I felt throughout the trip. My colleague was kind enough to lend me their GoPro for the trip, here is the compiled footage :-) 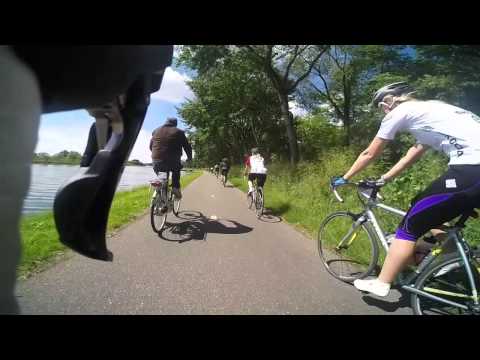